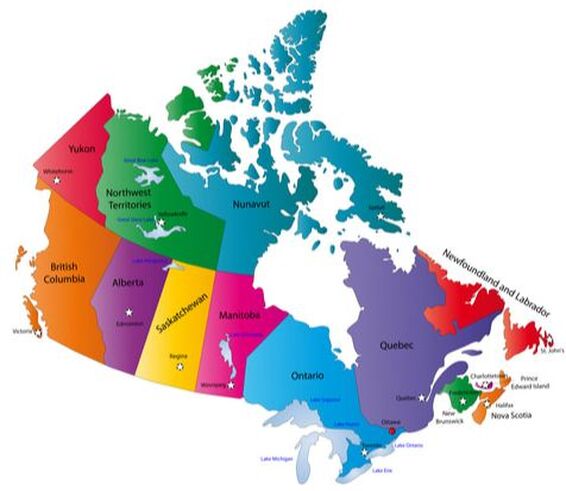 ​America has states, Canada has provinces and territories. Same idea, only bigger

The second largest country in the world, Canada offers visitors a range of experiences as varied as the land itself. It provides something to suit the taste of every traveller: large cosmopolitan cities; frozen northern tundra and snowy mountain peaks; rugged coastlines; rich farmlands; and pioneer outposts.
Canada is bound to the west by the Pacific Ocean and Alaska, to the east by the Atlantic Ocean, to the north by the polar ice cap, and to the south by the United States of America. It's a country renowned for its natural beauty, making it a favourite destinations for lovers of the outdoors.
The cities have been carefully designed to preserve metropolitan green belts and parklands, ensuring that Canadians are never far from their natural heritage. The country has a French and British colonial history, reflected in its cuisine, culture, and customs. Canadian identity is mixed in with the legacy of the country's own aboriginal First Nations history.
​In the south, the Rocky Mountains separate Canada's two main tourist provinces of British Columbia and Alberta. The mountains abound with winter sports resorts, with the most popular venues for outdoor pursuits being the country's huge national parks. There are more than 41 national parks in Canada, with the Wood Buffalo National Park in Alberta being larger than Switzerland. Canadian national parks are unique in that they have cities and towns within the protected areas, providing comfortable bases for exploring the natural and manmade attractions.
Helpful Travel Information:
Language: The official languages are English and French (spoken predominantly in Quebec).
Passport/Visa: All visitors must hold a valid passport. We recommend that passports always be valid for six months after intended period of
travel. Visitors are required to hold onward or return tickets, all documents needed for the next destination and sufficient funds to cover the period of intended stay.
Currency: The currency used is the Canadian Dollar (CAD). Banks and bureaux de change will change cash, as will some hotels.
Major credit cards are widely accepted and ATMs are widespread. US Dollars are widely accepted.
Electricity: Electrical current is 120 volts, 60Hz. American-style flat two-pin plugs and a plug with a third round grounding pin are standard.
Tipping: There is no service charge added to restaurant bills in Canada and staff expect a tip of around 15 percent.

If you like any of the resorts below, click on button below to check price and availability.
You can contact us at 757-425-3737​ or book direct through our site
Check Here
​*Disclaimer - All pictures and resort information are provided by the resort directly. Destination information provided by each Country's Tourist Board and Destination Canada. Tours are provided by Viator. ​ Travel Pros is not responsible for any incorrect information that may be listed or operations of supplier.
Info@GoTravelPros.com
(757) 425-3737
Your Travel Professionals, LTD
All Rights Reserved, 2020            ​